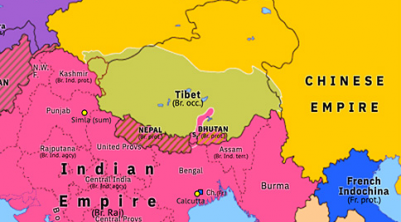 India-China bilateral relationship has been largely looked at from the perspective of the 1962 war and the unresolved territorial dispute. Tibet has been at the very centre of this conundrum, which had its origin in the colonial period when India was under British rule.  Literature produced in the last 58 years has extensively focused on this aspect and often projected this struggle between India and China as efforts to assert their dominance in the region. Likewise, scholarship on colonial India and Tibet’s interactions emphasise on Britain’s rivalry with China and Russia over the Tibetan issue.

This article focuses on the Bhutanese case to bring out the role played by the smaller Himalayan states in this power struggle. In this article, an attempt has been made to present the Bhutanese factor in the Britain-China power struggle in the period before the 1914 conference at Shimla.