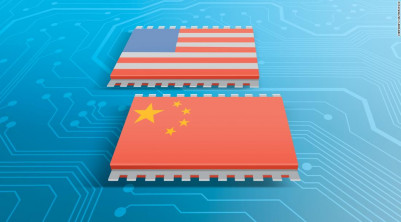 The current US-China stand-off underlines a major shift in the arena of geopolitical rivalry to technological competition. Unlike India, China and the US understand the importance of Science and Technology as drivers of growth and ultimately, geopolitical power. China aims to become the most globally advanced Science & Technology nation by 2050. Since Technology is the real foundation of power, this is triggering a US backlash. It has deployed its own multi-domain economic-technological (Eco-Tech) and geopolitical Playbook to counter China’s rise and stem technology flows to China. The Eco-Tech Playbook closes loopholes for technology acquisitions by China and addresses supply chain dependency on China, which has led to genuine concerns over “decoupling”. The “trade war” is therefore a Technology War. The Geopolitical Playbook covers many fields, but at its core, it too is aimed at maintaining U.S. global technological superiority, which is fully reflected in the US National Security and Defense Strategies.  The National Defense Authorisation Act (NDAA) is a detailed handbook for maintaining U.S. global superiority in frontier technology areas.  Counter-measures to stem technology flows to China like FIRRMA have been taken under the NDAA.  Under these circumstances, there can be no G2 for the foreseeable future, which China has begun to realise.