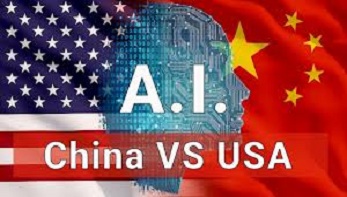 Artificial Intelligence (AI), an emerging dual-use technology, which holds the potential to change the nature of warfare, has the profound capability of reshaping the ongoing great power rivalry. From diplomatic engagements to traditional methods of warfare, AI may be leveraged to change the nature of warfare as well as redefine the concepts of strategic stability, deterrence, and balance of power. This paper argues that AI, in terms of its potential military applications, may dramatically affect the Beijing- Washington conflict and stability by aggravating strategic competition in new domains, including the nuanced multi-faceted and possible intersections with conventional weapons compromising nuclear deterrence. On one side, it argues that the potentials of militarized AI will keep continuous mistrust and ambiguity, which will increase the mutual strategic suspicion, and will significantly undermine the strategic stability between the two. On the other, it will also discuss the areas where AI may aid in ensuring stability and opens new avenues of cooperative engagements. Lastly, the paper briefly furnishes some measures to reduce the likely threat and instability.