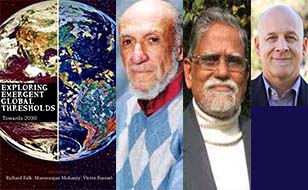 Our current era can be described as the beginning of a new, historical phase of the ‘Anthropocene’age, where humans are becoming increasingly conscious of the effects of their actions on nature,culture, and human relationships. As the first section shows, this realisation is acquiring greater significance in current development discourse and policymaking, particularly in Asia, Africa, and Latin America. The fate of the human species rests on a sustainable collaboration with nature, as is apparent by the impact of climate change on food, energy, and water.Arguing in favour of a possible decline in American importance, the second section discusses the encouraging opportunities this could create, as well as the future of both ‘citizenship’ and national self-determination. The third section focuses on the re-emergence of religion and civilisational identities as significant factors in world affairs, along with an exploration of alternative forms of secularism. The final section considers policy and behaviour – gender-specific practices and policies; political participation in India; and international peacekeeping operations.

SELECTED CONTENTS
The World Ahead: Entering the Anthropocene? Ecumenical Futures and the Imperative of Incommensurability: The Politics of Culture in the Modern World System Development as Civilizational Movement: Counter-hegemonic Prospects from Asia, Africa and Latin America Climate Change and Human Security in the DevelopingWorld After US Decline: (re)constructing a Just World Order Citizenship in Terminal Crisis? Thinking Beyond Twentieth-century Verities national Self-determination’ has a History: Does it Have a Future? Radical Religious Responses to Global Catastrophe The Different Futures of Secularism The Future of the Girl Child: Hopes and Concerns Local Governments: Outlook for the Future Global Futures: Peacemaking 2030 Afterword: Imagining 2030