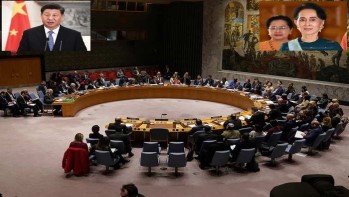 China has often been criticized for shielding Myanmar from international scrutiny, particularly in the United Nations Security Council. The latest instance being China’s veto on 3 February 2021 against a UNSC joint statement condemning Myanmar’s military for organizing a coup, putting State Counselor Aung San Suu Kyi and other members of the National League for Democracy (NLD) under detention and causing hundreds of civilian deaths. This is in addition to two previous negative votes in 2007 and 2017 at the UNSC. This paper by tracing the history of China-Myanmar diplomatic relations and by mapping Myanmar’s role in China’s regional strategy seeks to understand China’s stances in the UNSC with regards to Myanmar, the impact that has on Myanmar, China’s interests and perception of the issues in Myanmar, its stance on its principles, its behaviour as a UNSC permanent member, and what that says about China as a rising and as a regional power. It concludes that although it is a genuine concern for China to maintain stability in Myanmar; however, its importance in China’s strategic calculation also constrains China from any outright repudiation of Myanmar’s repressive actions. As such, China is likely to continue shielding Myanmar from punitive measures as its interests there is deeply entrenched with its political support, particularly at the UN.