Tanaka Shōzō 田中正造 (1841-1913): The Politics of Democracy and Equality in Modern Japan 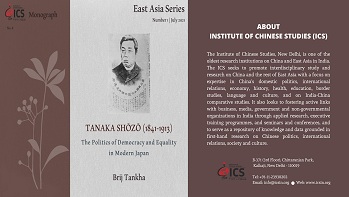 The East Asia Programme of the ICS has started the East Asia Series (Brij Tankha editor) to publish monographs and occasional papers covering subjects in history, political science, economics, culture, translations, and other areas relevant to the region. These will be refereed publications. The East Asia Programme began in 1999 with a project on the Asian Construction of Asia supported by the Japan Foundation. This is the first monograph to be published under the East Asia Series, with the aim to foster a better understanding of Japan.

This study by Brij Tankha examines the political activities and ideas of Tanaka Shōzō (1841-1913田中正造), a powerful figure in the history of environmental movements, to argue that his political agenda had larger political objectives which underline his radical break with the ruling establishment. Shōzō fought two inter-related but different battles, one to establish a constitutional monarchy in Japan and the other the equally important battle to realize an equal society. His objectives were in opposition to the Meiji oligarchy. The author explores these questions through the practice of politicians and the policies they pursued, locating the creation of constitutional democracy in Japan within the global context, but as the creation of local struggles and not just the import of Western ideas and institutions. Building a base in Yanaka, the site of struggle against the Ashio copper mine pollution case, Tanaka Shōzō sought to create an intellectual and political alternative to the nationalist, authoritarian, and imitative modernity that the Meiji oligarchy was engineering by articulating a new pedagogy that he called Yanaka-ology, the Yanaka methodology and through this, he evolved an intellectual agenda, based to borrow the words of Hannah Arendt, 'the right to have a right'. His political and intellectual legacy continues to inspire contemporary movements in Japan and elsewhere.