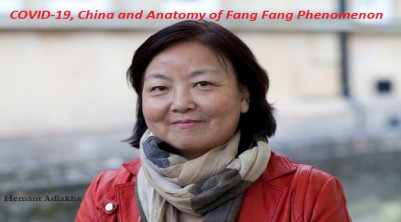 In modern China, even under Mao’s communist era, literature has been regarded as an instrument of political dissent. Two major approaches are required to seriously reflect on how to understand the anatomy of the Fang Fang Phenomenon: one is to view it in the historical context of New Culture Movement or the birth of ‘enlightenment’ in early 20th century China; the other, to critically examine a paradigm shift in the Communist Party of China (CPC) seeking political legitimacy through 维稳weiwen or 'social stability' during reform era, especially since the Tiananmen protests and the Soviet collapse. Fang Fang is not an ordinary Chinese living in Wuhan – the first epicentre of the ongoing global pandemic. Wang Fang, her real name, is an acclained, award-winning writer who has published widely in different genres. Her 60 days diary, called Fang Fang Diary, giving a daily commentary on the life and death in the streets of locked down Wuhan, has apparently created unprecedented split among the country's intelligentsia and has rattled the party orthodoxy. The unexpected popularity of Wuhan Diary or Quarantine Diary, as it is also being called, has recast Fang Fang from a well-known writer into China's most revered voice of literary dissent. Many call her 'conscience of Wuhan'.