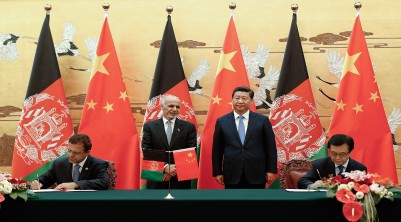 China has maintained relations with all Afghan administrations except for the pro-Soviet governments (1979-1989) which it refused to recognize. While Beijing condemned the Soviet invasion of Afghanistan, it also remained officially inactive in Afghanistan during the Taliban government. However, the Afghan analyst Malik Setiz writes that China did have unofficial relations with the Taliban Government (Setiz 2015).

Since 2002, China has been supporting the new government in Kabul both financially and politically. China is one of the biggest foreign investors in Afghanistan. The Logar Aynak, copper extraction project, for instance, is the biggest foreign investment in the country so far. In the meantime, it has two further stakes: one, diversification of energy resources by investing in Central Asia’s gas-rich countries like Afghanistan, which is geopolitically significant as a corridor of transportation and source of energy, and two, national security concerns. China fears that the trauma and political instability of Afghanistan could strengthen the political forces of East Turkestan represented by Uyghur Muslim separatist activities in its Xinjiang province.

Withdrawal of US and NATO from the country will create a vacuum which could be filled up by India, Russia and China. As one analyst has noted, ‘So far, all three [regional powers] have been content to let the US handle the security situation in Afghanistan’ (Bose 2014). This paper explores China’s role in Afghan-Taliban peace talks in general, and argues that China can facilitate Afghanistan’s peace process by utilizing its influences over the members of Shanghai Cooperation Organization (SCO). In other words, reconciliation will be more conducive if China transforms the peace process from solely a Chinese initiative to a SCO regional mobilization for peace and stability in Afghanistan. This paper looks at the issue from the perspectives of ordinary Afghan citizens, social activists and other political forces. At the same time, it explains the power-sharing and structural barriers to peace talks. It also explores the Taliban stances towards peace negotiations with Chinese initiatives, and the regional atmosphere.