Abe’s Re-election as the Liberal Democratic Party President: Analysing the Process, Outcomes and Challenges Ahead 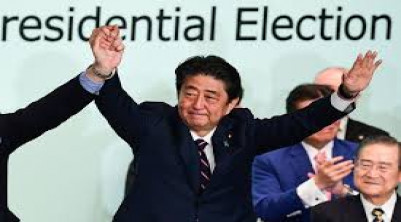 Japanese Prime Minister Shinzo Abe has been re-elected as the President of the ruling Liberal Democratic (LDP) in presidential election held on September 20, 2018 by defeating Shigeru Ishiba, a former Secretary General of the party. By winning re-election for Party’s presidency for another three year term, Abe has cemented his position within the party and will continue to assume Prime Minister’s office till September 2021 which coincides with the term of his presidency. Various lessons could be learnt from the result of the LDP’s Presidential election. Most important among them is that the hawkish factions of the LDP have cemented their position within the LDP leadership. In the past, leadership rotated between the so called dovish and hawkish factions. The hawkish factions have been more aggressive on changing the pacifist Constitution and giving more power to Japanese defense forces, a move which has been opposed and resisted by Japan’s immediate neighbours as well as pacifist constituency within the country. During the Presidential election campaign, Shinzo Abe has unveiled his agenda to revise the Constitution to give Constitutionalstatus to its Defense Force. Other agenda include making economy more vibrant, providing free and affordable education to students.At the foreign policy front, Abe is grappling with resolution of abduction of Japanese nationals with North Korea, normalization of relations with China which has deteriorated after Japan’s decision to nationalize the Senkaku Islands as well as resolution of territorial dispute with Russia. Against this context, this paper analyses the LDP’s election process, key issues highlighted by the candidates and Abe’s agenda for Japan during his apparently final term in the office as well as challenges he faces to implement these agenda.