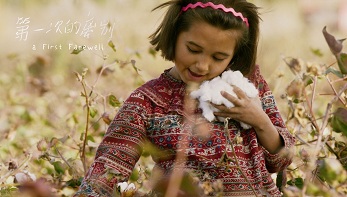 Lina Wang’s directorial debut has been described as “a poem to her hometown, portraying a Muslim farm boy’s relationship with his deaf-mute mother, his friendship with a girl, and his parting from them”. A First Farewell (October 2018) is a moving story about a school boy from a family of goat herders in Northwest China's Xinjiang Uygur Autonomous Region. The elementary school boy, Isa, leads a carefree life but must say a number of sudden good-byes. The first farewell is to his beloved mother who, his father has decided to send to a care facility because she is deaf; and the other good-bye is to his schoolmate and good friend Kalbinur. Because Kalbinur has been getting bad grades, her parents have decided to send her away to a faraway school. A First Farewell became one of the first films to be released in China in August last year following the reopening of movie theatres after being shut down due to COVID-19. The film was a surprise box-office success as many film critics did not expect an ethnic minority theme-based film to catch the attention of the Chinese movie-goers. The “Xinjiang Film,” as it is referred to in the Chinese mainstream media, has already won several national and international awards/nominations, including the international jury best honour award by Generation Kplus sidebar of children’s films at the 69th Berlin International Film Festival, the Asian Future Best Film award at the Tokyo film festival, China’s prestigious Golden Rooster Award for Best Directorial Debut and the Firebird Award of the Young Cinema Competition (Chinese Language) at the 2019 Hong Kong International Film Festival.