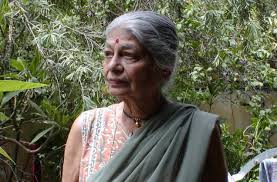 Mira Sinha-Bhattacharjea (1930-2009) was a founding member of the China Study Group, former Director of the ICS, Editor of the journal, China Report, Co-Chairperson, ICS, and Emeritus Fellow, ICS. She joined the Indian Foreign Service in 1955, before leaving four years later and subsequently joining the Department of Chinese and Japanese Studies (now the Department of East Asian Studies) at the University of Delhi where she taught Chinese Foreign Policy for over a quarter of a century and left an indelible mark on the minds of her students.

MSB's scholarship as reflected in both the classroom and in her writings had two distinct but inter-related elements — the ability to understand the broad view, paradigm or the framework governing a policy and the capacity to take into account every little detail to make sense of a situation and to discern the trends. Not only did she author numerous scholarly works, including a book, ‘China, the World, and India’, but also wrote frequently in newspapers about China and Sino-Indian relations. As Director and later as co-chairperson of the ICS, MSB was a great institution-builder and encouraged the professional growth of young China scholars.

The Mira Sinha-Bhattacharjea Award has been instituted by the ICS in her memory. It comprises prize money of Rs.25,000/- and is awarded to the best paper presented by a young scholar under the age of 40 at the annual All India Conference of China Studies.

The 2022 Mira Sinha-Bhattacharjea Award has been conferred upon Ms. Cherry Hitkari for her paper titled, “Rocking the Cradle, Ruling the World: Crafting the Ideal Citizen through Children's Songs in the People's Republic of China” which was presented at the 15th All India Conference of China Studies (AICCS) held virtually in collaboration with the Indian Institute of Technology Guwahati, Gauhati University, Omeo Kumar Das Institute of Social Change and Development and the India Office of the Konrad-Adenauer-Stiftung, from 17–19 November 2022.

Ms. Hitkari is currently enrolled in a PG Intensive Advanced Diploma Course in Chinese Language (CF-2) at the Department of East Asian Studies, University of Delhi.

2021 MSB Award - Madhurendra Jha received the 2021 MSB Award for his paper titled, “Involution or Alienation? Visiting the Issue through Jia Zhangke’s ‘Hometown Trilogy’” presented at the 14th All India Conference of China Studies held virtually in collaboration with Cheena Bhavana, Visva-Bharati University and the India Office of the Konrad-Adenauer-Stiftung, from 11-13 November 2021. Mr. Jha is an Assistant Professor at the Department of Chinese Studies, School of Languages, Doon University, Dehradun.

2020 MSB Award - Shivi Sanyam, Rahul Suryavanshi, and Yash Johri have received the 2020 Mira Sinha Bhattacharjea Award for their paper titled, "Reigning in the Brahmaputra: Challenges to and Opportunities of Inter-Basin Cooperation", presented at the 13th All India Conference of China Studies held virtually in collaboration with the Indian Institute of Technology - Madras China Studies Centre, Chennai, from 28-30 January 2021.

Mr. Shivi Sanyam is a Delhi-based counsel, having an independent law practice. Mr. Rahul Suryavanshi works in the Finance Industry in Mumbai and holds a degree in Economics from NMIMS Bengaluru. Mr. Yash Johri is a Delhi-based lawyer working with a leading Indian Law firm.

2019 MSB Award - Ramnath Reghunadhan for the best paper at the 12th All India Conference of China Studies held at O.P. Jindal Global University, Sonepat, Haryana, from 8-10 November 2019. Mr. Reghunadhan, is a doctoral student, at the China Studies Centre, Indian Institute of Technology, Chennai, and wins the Award for his paper, 'Intellectual Property Governance and Protection in China: A Case Study Approach'.

2018 MSB Award - Shruti Sonal, for the best paper at the 11th All India Conference of China Studies held at CHRIST (Deemed to be University), Bengaluru, from 15-17 November 2018. Ms. Sonal, is a Master's student, at the Department of International Studies and History, CHRIST (Deemed to be University), Bengaluru and wins the Award for her paper, 'Chinese Science Fiction and its Socio-Political Engagements'.

2017 MSB Award - Sankalp Gurjar, for the best paper at the 10th All India Conference of China Studies held at  Goa University, Goa from 12-14 December 2017. Mr.Gurjar is a doctoral candidate at South Asia University, New Delhi and wins the Award for his paper, ‘Chinese Maritime Activities in the Indian Ocean Maritime Africa’.

2016 MSB Award - Samar Tyagi, for the best paper at the 9th All India Conference of China Studies held at  Mumbai University, Mumbai from 14-16 December 2016. Mr.Tyagi is a Project Associate at the Dept. of Humanities & Social Sciences, IIT Roorkee, Uttarakhand and wins the Award for his paper, ‘Tracking Chinese Aid in Africa: A Panel Data Analysis’.

2014 MSB Awad - Jigme Yeshe Lama, for the best paper at the 7th All India Conference of China Studies held at Benares Hindu University, Varanasi from 14-16 November 2014. Mr. Lama is a PhD Scholar from Jawaharlal Nehru University and wins the Award for his paper, ‘Impact of China’s Economic Reforms on State Society Relations in Tibet – Growth of Secularisation of Religious Elements’. The ICS also wishes to highly acclaim two other scholars for their papers. These are Mr. Mrutyunjay Kumar Swain, Senior Research Officer, Sardar Patel University, Vallabh Vidyanagar, Gujarat for his paper, ‘Historical Perspectives, Impacts and Adaptation with Drought in India and China’ and Mr. P. K. Anand, Research Assistant, Institute of Chinese Studies for his paper, ‘The Changing Labour Relations in China and the All-China Federation of Trade Unions (ACFTU)’.

2013 MSB Award - Dhriti Roy, Assistant Professor, Department of Chinese, School of Language and Literature, Sikkim Central University for her paper titled, "Chinese Humanist Thought on State and Society - Is There Something to Learn From Ancient Chinese Philosophical Writings for Modern Governments?" presented at the 6th All India Conference of China Studies, organized by the ICS at the Indian Institute of Management, Kozhikode, 12-14 December 2013.