Gautam Das has been fascinated by many aspects of Chinese culture since an early exposure in the Kolkata of the early 1950s. He was practically involved with the Sino-Indian border issue while an Army officer in the period 1968-1991. The sudden onset of the brief Sino-Indian border war in October 1962, which occurred while he was in boarding school in Darjeeling, created an interest in researching the underlying reasons for the war. Due to both professional involvement as well as personal interest, he was able to do so during his military service, during which he had both ground exposure as well as General Staff exposure to the Sino-Indian border issue.

His interests include Chinese art (painting and three-dimensional), Chinese cuisine, and the Chinese martial arts. He is also interested in Mongolian history and Mongolian horsemanship. He is the author of several books on military matters - military history, Sino-Indian border issues and the border war of 1962, defence policy, and counter-insurgency policy for North-East India. 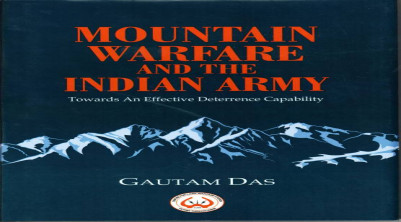 The book predicts about the most likely next theaters of war for India which are its northern and north-western mountain frontiers. These disputed borders with china, and the perpetually tense 'NO WAR ON PEACE' and simmering low intensity perpetual war situation with Pakistan along the line of control (LOC) and the so-called Actual Ground Position Line (AGPL), are physically held on to by India at great cost in men and material. A constant heavy military deployment on these mountain borders has become the norm for India.

President Xi Jinping of China enjoys much greater personal power in China than his immediate predecessors, and the strength and capabilities of the armed forces of China today command respect both in the Asia-Pacific region and the world.