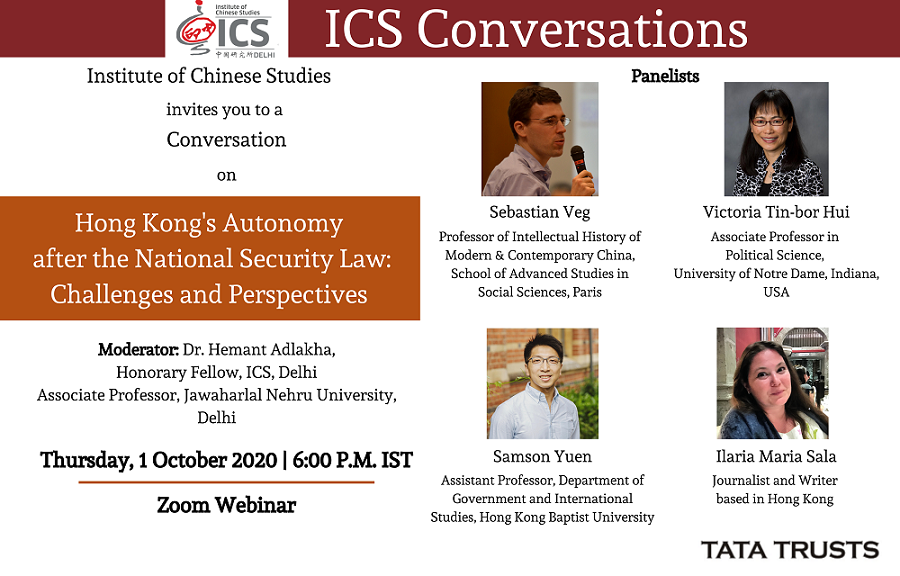 The coming into force of the National Security Law (NSL) in Hong Kong on 30 June 2020 - enacted by the Standing Committee of China’s National People’s Congress - marks a decisive phase in the region’s political future. With the passage of NSL, circumventing Hong Kong Special Administrative Region’s (HKSAR) own legislature, the constitutional principle of ‘One Country Two Systems’ that provides significant autonomy to the region has also come under question. Since Britain’s handover of Hong Kong to China on 1 July 1997, the region has witnessed different phases of discontent over a range of issues. The cornerstone of the discontent has been apprehensions and anxieties over direct control by the Mainland. The tide of protests have increased over the last year, especially surrounding the proposed bill that sought to legalize extradition of people to China. The NSL has been widely criticized, as it underlines direct control over the region, and criminalizes dissent and protest actions. With significant punitive ramifications, the law also carries implications beyond Hong Kong and China’s territorial jurisdictions.

Sebastian Veg is a Professor of Intellectual History of modern and contemporary China at the School of Advanced Studies in Social Sciences (EHESS), Paris and an Honorary Professor at the University of Hong Kong. His most recent book is Minjian: The Rise of China’s Grassroots Intellectuals (Columbia UP, 2019).

Victoria Tin-bor Hui is Associate Professor in Political Science at the University of Notre Dame, Indiana, USA. She received her Ph.D. in Political Science from Columbia University and her B.SSc. in Journalism and Communication from the Chinese University of Hong Kong. Hui studies contentious politics and Hong Kong’s democracy movement. She has testified at the US Congress and written for Foreign Affairs, the Journal of Democracy, Washington Post’s Monkey Cage, The Diplomat, and other channels. Hui’s core research examines the centrality of war in the formation and transformation of “China” in the long span of history. She has published War and State Formation in Ancient China and Early Modern Europe, “The Emergence and Demise of Nascent Constitutional Rights,” “Cultural Diversity and Coercive Cultural Homogenization in Chinese History,” “Confucian Pacifism or Confucian Confusion?”, “The China Dream: Revival of What Historical Greatness?”, among others.

Samson Yuen is Assistant Professor, at the Department of Government and International Studies, at Hong Kong Baptist University. He studies contentious politics, civil society and state power, with a particular focus on the Greater China region. He has published articles in Mobilization, Political Studies, Communist and Post-Communist Studies, Social Movement Studies, Journal of Contemporary Asia, Journal of Contemporary China, China Information, Modern China, among others. He is a co-editor of An Epoch of Social Movements (Chinese University Press, 2018). He holds a number of competitive research grants from Hong Kong Research Grants Council and the Policy Innovation and Coordination Office. His research on protests have been featured in many local and international newspapers, including the New York Times, CNN, Financial Times, Bloomberg and Wall Street Journal. He holds an MPhil in Comparative Government and DPhil in Politics from Oxford University.

Ilaria Maria Sala is an award winning journalist and writer, with three decades of experience living and working in East Asia. Her writing has appeared in The Guardian, The New York Times, China File, Le Monde, Japanese Newsweek, La Stampa and many other publications. An alumna of the School of Oriental and African Studies in London, she has also studied at Beijing Normal University and Beijing University. She is the author of three books in Italian - her latest, Pechino 1989, a photographic memoir of the Beijing protests in 1989, was published by Una Città in 2019. Articles, poems and chapters have also appeared in various English language publications, from Asian Cha to Aspenia and Hong Kong 20/20: Reflections on a Borrowed Space. She can be followed on Twitter at @ilariamariasala