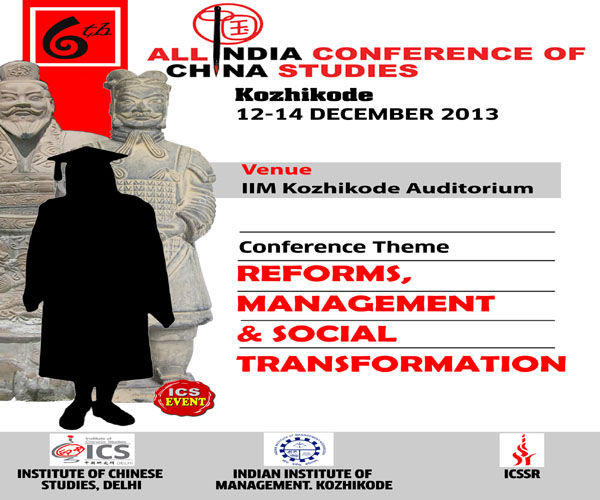 The 6th All India Conference of China Studies (AICCS)

The Sixth All India Conference of China Studies was held at IIM- Kozhikode on December 12-14, 2013. The Institute of Chinese Studies (ICS) organized this year’s edition of the conference in collaboration with IIM- Kozhikode and ICSSR. The special theme for the 6th AICCS at the Indian Institute of Management, Kozhikode (IIM-K) was “Reforms, Management and Social Transformation”.

The conference was inaugurated by Prof. Debashis Chatterjee, Director, IIM- Kozhikode. In the inaugural session, Prof. Alka Acharya, Director, Institute of Chinese Studies & Convenor of the Conference gave the inaugural address and the Keynote Address was delivered by Mr. Ashok Kantha, Secretary (East), Ministry of External Affairs & Ambassador-Designate to the People’s Republic of China. Dr. G. Venkat Raman, Assistant Professor, IIM Kozhikode & Co-Convenor of the Conference, proposed the vote of thanks on behalf of the organizers.

The three days of the conference saw paper presentations and discussions on a wide range of areas under the following broad themes.

Session I: State of the Field/China Today

The Special Session on the 13th December, moderated by Amb. Kishan Rana saw Prof. Manoranjan Mohanty, Prof. Aka Acharya, Mr. D.S. Rajan, Mr. Ravi Bhoothalingam and Dr. G Venkat Raman deliberating on the issue of rise of China and its impact on India and the world at large. In the last session, Prof. Kamal Sheel, Professor of Chinese Studies, Dept. of Foreign Languages, Banaras Hindu University, Varanasi invited the participants to the Seventh All India Conference of China Studies, to be held in Banaras Hindu University in collaboration with ICS in November/ December 2014.

The Conference was attended by a large number of scholars engaged in research on China from different universities and institutions across India. It concluded with a vote of thanks proposed by Dr. G Venkat Raman, of the host institution and the Co-convenor of the Conference.